skip to main | skip to sidebar

SATURDAY
I participated in my first Komen Race for the Cure Saturday. I was so happy when I was getting ready to register and Rachel told me she would like to participate with me!! We had to get up at 4:15 to pick up one of my support group friends at 5:15 and be in Rogers by 6:30 for the survivor breakfast festivities. It was an early morning but it was a fun day! We met up with several of the other ladies from my support group at breakfast. I wish we'd gotten a picture together but we got in a hurry and I didn't get it. I was AMAZED by the number of people who were there. They say there were about 18,000 registered for the run (I think that includes the 5K and the 1 mile family fun walk). Let's just say this - there were A LOT of people there!! I was even interviewed by a young man from a student newspaper - I didn't ask but I am assuming from U of A. I think it all finally hit me Saturday night when I hit the shower and I was thinking about a question I heard being asked that day - why do you run?? My simple answer came to me in that short moment - because I CAN, because I am HERE, because I am HEALED!! I was overcome with emotion thinking of how grateful I am because I know some who are not able and some who are not here. To GOD be the glory!! 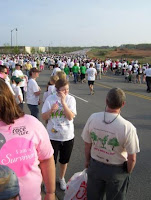 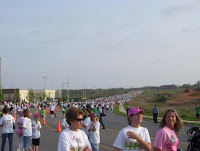 I wish these pictures were better to show you how many people there were - they were stretched as far as the eye could see!! 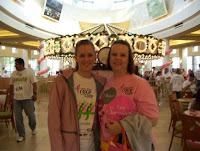 Rachel & I at the Survivor Breakfast


SUNDAY
I lost or deleted this while uploading the pictures so I hope it works this time!! Robert bought a used canoe over the weekend and Rachel decided Sunday would be a great time for a family float trip to try it out. The guys have been on several multi-day float trips in the past few years but Rachel and I haven't been on the river for a while. Robert and Allan started loading the canoes and gear while Rachel and I packed a picnic lunch and lots of sunscreen (that I *should* have put on my legs). We decided to float the Mulberry River from Byrd's to Turner Bend which was about a 3 1/2 hour float. It was a gorgeous day for a float trip!! We headed out from Byrd's with Robert and I in our aluminum canoe with the cooler and most of the other gear. The kids were in the "new to us" canoe which is a smaller fiberglass? Mohawak canoe. They did well for the first little bit and then...they were upside down for the first of about 4 times to turn over. Rachel was fine after the initial shock of it. Allan...he was a great sport about it all - even after the last spill!! Robert and I never turned over!!!! We did have to stop to empty the water twice after getting swamped going through some rapids though. It was such a fun day together! Normally, we probably wouldn't have skipped church for a day of canoeing but these kind of days have been rare since the summer of 2006 when I was diagnosed with breast cancer. I am finally feeling somewhat normal again and trying to live life to the fullest! It's great to be on the go again - the kids and I will be in Mansfield this weekend for a wedding shower for my niece, Amy; the following weekend we'll all be at The Wilderness Lodge at Big Cedar in Branson. It's great to be living...loving...life!!! 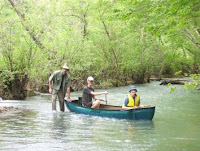 The kids took a different route and had to portage over two trees!! 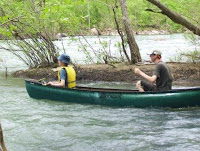 On the go again 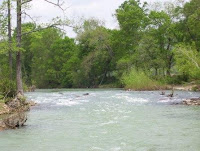 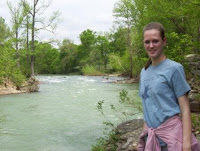 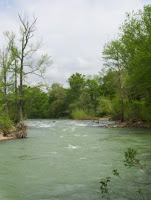 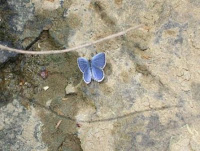 There were lots of these butterflies around

Life at the Lake
This blog reflects our "life at the lake" where we have lived since 1991. Robert and I have been married for 27 years and have been blessed with two great kids - Allan is 22 and Rachel is 18. I have been a stay at home Mom for the past 22 years, home educated our children for 11 wonderful years, and am now learning about life as an "almost" empty-nester.